Before 1982, you could have any beer your heart desired as long as it came from either the Labatt, Molson, or Carling O’Keefe breweries. That’s right, these three commercial breweries had a stranglehold on the beer drinking preferences of an entire nation. That was all we knew back then, but behind the scenes dissatisfaction was brewing. People were making homebrew, others were returning from Europe with tales of beers that weren’t mass produced – beers that tasted different, more interesting. Aficionados were looking for more. Sounds like a Netflix drama doesn’t it? Perhaps it should be!

That’s not to say that beer from commercial breweries was, or is, poor, it’s just a different beast when compared to craft beers. For example, think about polar opposites Labatt’s Blue and the Belgian style La Fin Du Monde. The latter is served at just below room-temperature, not the frigid coolness of a commercial pilsner lager or almost any commercial beer for that matter. This is a beer that’s brewed just like it would have been 200 years ago. There are no hops, just the malt; the flavours come from spices such as coriander and orange peel which are added to the first brew. Then it’s bottled with some sugar which creates the secondary fermentation – that’s the carbonation.

La Fin Du Monde needs some tender loving care, not only from the craft brewer but also from the person about to savour it. If you are lucky enough to be holding some of these craft-brewed, bottle-conditioned beers right now, you should rotate the bottle gently in your hands before opening it so as to coax the full flavour and texture. La Fin Du Monde has won World’s Best Beer three times – if you aren’t gently twisting a bottle right now and can’t wait to taste this special beer, head over to either our Courtenay, Estevan, or Mattick’s Farm branches where we have some waiting for you; at just the right temperature.

Back in 1982, this is what Frank Appleton and John Mitchell were dreaming of when they opened Canada’s first micro-brewery. The Horseshoe Bay Brewery, West Vancouver supplied beer to their pub, the Troller, just a little ways down the road. At the time it was vital that the two entities were located in separate buildings; the law did not allow brewing, selling and supping all in one location. There were other obstacles, the beer had to be brewed using dairy farming equipment as there was no specialist craft brewing equipment available. The brewery’s Troller Bay Ale was a huge success and the brewery couldn’t keep up with the demand; the pub was constantly running dry – patrons who demanded more were witnessing, and taking part in, the birth of the craft beer industry in Canada.

Mitchell travelled to Britain to check out suitable brewing equipment and also British craft beers. Upon his return, he got together with Paul Hadfield, an architect with a passion for beer, and a group of other aficionados to taste what Britain and America had to offer by way of interesting brews. To be thorough, they also tried beers from local home brewers.

The best beer we drank was from home brewers,” Hadfield explains. “Beer doesn’t travel very well; I yelled eureka! We have the expertise and technology in this room to do this. My job was to find the dirt and build the building. I wanted to change the idea of a pub … to give people a living room … to offer good local food in a social atmosphere.

Mitchell’s success in getting liquor licensing laws relaxed enough to allow him to hold a pub and a brewing license at the same time, encouraged Hadfield to lobby local, provincial and federal governments to allow him to brew and sell in the same building. And so, with Mitchell’s help Hadfield opened Spinnakers, Canada’s first on-site brewpub. This, at a time when pubs couldn’t have windows, draft beer couldn’t be imported into B.C., and there were no neighbourhood pubs in Victoria.

Today, the craft beer market is experiencing unprecedented growth and unparalleled creativity. Craft beer sales have almost tripled in the past five years. In 2010, there were 54 craft breweries in B.C., today there are around 165, and between 2013 and 2015 output grew by 44 percent. 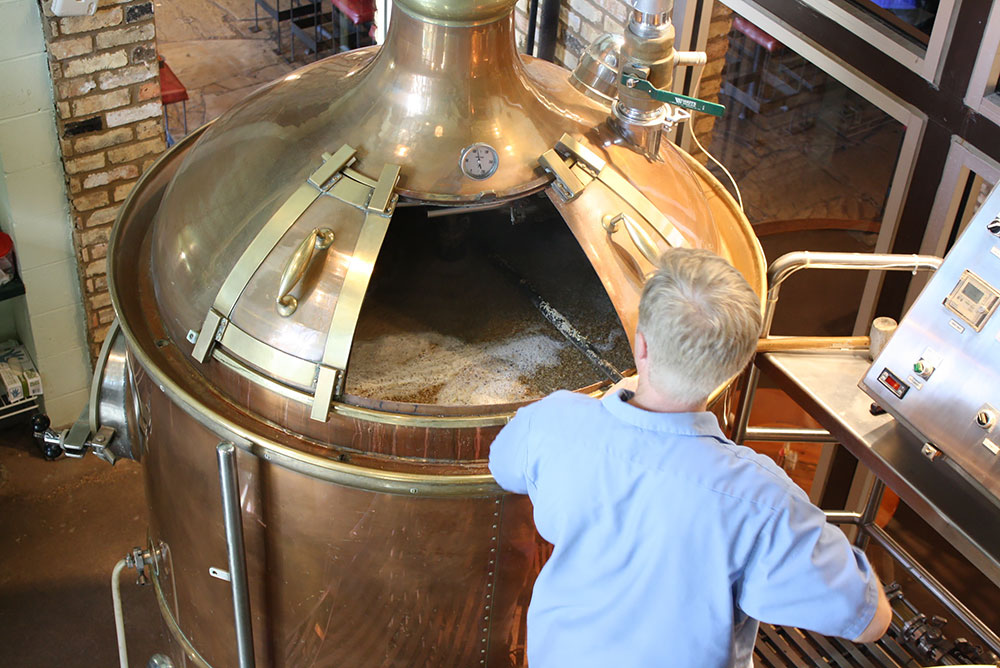 There are approximately 75 craft beer styles to choose from, from Amber Ale to Smoked Porter and too many beer names to count. Many with hilarious, and sometimes scary, names including Longwood’s Berried Alive crafted from local raspberries and then re-fermented with Longwood’s lightly hopped Blonde Ale. This is a beer that offers the perfect balance between tart and tasty – distinctly refreshing! Feeling fruity? Pop down to our Saanich Centre or Royal Oak branches and pick some up for this weekend.

If you haven’t tried a craft beer yet, what are you waiting for? Some of our favourites are; Bottle Rocket, Red Racer and Spruce Tree Ale.

Smooth Style for Your Spring Soiree with Viognier!

Finding The Perfect Pairing: How Our In-Store Tablets Can Help
Scroll to top